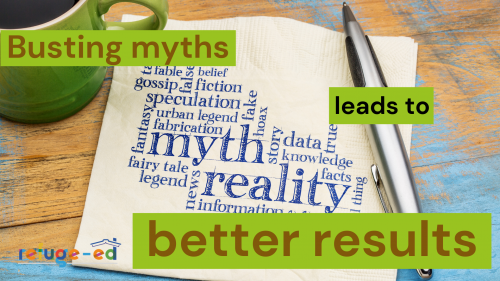 In education, practice is too often based on myths and assumptions – “edumyths rather than scientific evidence leading to low quality teaching.

But when edumyths are replaced by scientific evidence of social impact, international research shows improvement in results (Transforming students’ attitudes towards learning through the use of successful educational actions (plos.org, 2019).

These improvements can have a strong social impact. Basing education on principles that have proven positive social impact is an essential step towards equity in education. Equity in education, according to UNESCO “involves reducing disparities based on sex, poverty, place of residence, ethnicity, language and other characteristics”.

A strong edumyth is that schools in the lowest socio-economic settings, with a large proportion of students coming from poor immigrant families of different origin will have low academic results. But that does not have to be the case. Research shows that when education programmes are based on methods that have a proven social impact and teachers have received adequate training in using them, these schools obtain the same results in mathematics, language, and other subjects as the average of their country and even than the average of the centers of higher socio-economic levels. At the same time, they show better co-existence with the surrounding community than comparable schools. This is not an exception or a coincidence, but the result of scientific training of the highest level that can be provided. (Turning difficulties into possibilities: engaging Roma families and students in school through dialogic learning (tandfonline.com)

In 2011 the European Commission’s Directorate-General for Research published a list of the 10 most successful European research projects. It included an investigation of social sciences and humanities, which concluded that educational centers of low socioeconomic level that implemented practices based on scientific evidence obtained extraordinary improvements in results: The General Directorate of Education has since published European Toolkit for Schools (schooleducationgateway.eu), including, among others, practices based on scientific evidence of social impact.

It begins with education of teachers

Universities and teacher’s colleges can play a key role in this needed turn by equipping education professionals with evidence of social impact published in scientific journals. When professionals trained go to schools with low socioeconomic status and families, they may expect their students to have low results as well. And indeed, some of them do, because it is a fatally self-fulfilling prophecy. Teaching future educators to distinguish between practices based on myths and practices based on evidence will ensure vast improvements in the students they teach.

Proven social impact takes evidence to the next level

As the EU Programme for Research and Innovation Horizon Europe and other international research programmes have shown, there is a clear difference between scientific evidence and demonstrated social impact (Besselaar et. al., 2018).  Scientific evidence is indeed important. However, improving professional practice requires of scientific evidence that has already demonstrated social impact. For example, a study can scientifically describe inequalities in academic achievement between two groups of children. This is important knowledge that points to a problem that must be addressed. But beyond knowing about the underlying conditions that are creating such situation of inequalities it is necessary to also have knowledge about which practices can overcome these inequalities.

Scientific evidence is important, but before it becomes a valuable contribution to improve practice in education, it also needs to demonstrate its social impact. Scientific evidence of social impact is what tells us which practices improve student results and which do not. In addition, they also make their limitations clear and tell us which ones work well in a certain type of center or context and which ones obtain improvements in any context in which they are rigorously implemented.

This is a translated and edited version of an article originally published in: https://www.fecyt.es/es/FECYTedu/la-equidad-requiere-la-sustitucion-de-edumitos-por-practicas-guiadas-por-evidencias